Irritable bowel syndrome (IBS) is thought to affect around one in 10 people in the western world and, despite how common this condition is, it’s not very well understood.

Conventional treatments have, thus far, been limited to symptom management, but some leading scientists believe that the secret to treating and potentially even curing irritable bowel syndrome could lie with cannabinoids, such as CBD.

In this article, we’re going to take a closer look at the reasons why more and more people are turning to CBD for IBS, by looking at:

Why people are turning to CBD for IBS

The reason why so many people are asking “does CBD help IBS?” is because some scientists studying cannabinoids and the digestive tract believe that IBS, along with some other treatment resistant conditions (migraines and fibromyalgia in particular) are all caused by deficiencies in our bodies’ endocannabinoid systems.

If this is true then modulating our endocannabinoid systems could prove to be a novel treatment solution for a number of digestive disorders and may indeed be the key in solving IBS once and for all.

What do we know about IBS?

IBS isn’t a life-threatening condition but frequent stomach pain and digestive distress can greatly impact a person’s quality of life. In order to avoid typical IBS symptoms, such as abdominal pain, spasms, bloating, and difficult toilet trips, many sufferers end up following a strict IBS diet (FODMAP diet) that includes a huge list of foods to avoid with IBS.

IBS sufferers can be subdivided into those with predominantly diarrhea (IBS-D), predominantly constipated (IBS-C), and those with mixed or alternating stool patterns (IBS-A). No matter which type of IBS you are diagnosed with, it is considered a life-long functional disorder.

All identified potential causes are linked to the loss of equilibrium in the digestive tract, in which the delicate balance involved in digestion, including absorption, immune defense, and excretion, becomes compromised.

Gastrointestinal insults, in the form of antibiotics or food poisoning, may trigger attacks that can persist indefinitely and IBS attacks are also commonly associated with anxiety, depression, and stress, due to the brain-gut axis.

The brain-gut axis or connection describes the two-way signaling that occurs between your central nervous system and enteric nervous system (which is essentially your stomach’s brain) and explains how mental health problems can contribute to functional problems in your gastrointestinal tract and vice-versa, presenting a classic chicken vs egg dilemma of what came first?

Some research suggests that patients can also develop a vicious cycle of ever-worsening physical and psychological symptoms.

The endocannabinoid system and IBS

Our endocannabinoid system (ECS) plays an essential role in helping our bodies achieve a state of homeostasis, by regulating a wide range of physiological and cognitive processes, including pain, mood, sleep, digestion, and memory.

The ECS performs protective activities in the gut and is also known to coordinate gastrointestinal propulsion, secretion, inflammation, and nociception, actively controlling your gut’s homeostasis or equilibrium. For this reason, the ECS has been identified as a “promising therapeutic target” against a variety of gastrointestinal conditions.

What is clinical endocannabinoid deficiency (CED)?

Your endocannabinoid tone describes your body’s levels of anandamide (AEA) and 2-arachidonoylglycerol (2-AG), which are your body’s centrally-acting, naturally-occurring (endo)cannabinoids, and the relative density of cannabinoid receptors in the brain.

It makes sense that if your ECS isn’t able to function properly, then any one or all of the processes that it’s in charge of regulating could potentially be thrown out of whack, including pain, sleep, mood, and (of course) digestion.

Another scientific paper, published in 2016, reviewed all available evidence on endocannabinoids and the gut and also agreed with Dr Russo, stating that “dysregulation of the endocannabinoid system might play a role in intestinal disorders, including inflammatory bowel disease, irritable bowel syndrome, as well as obesity”. 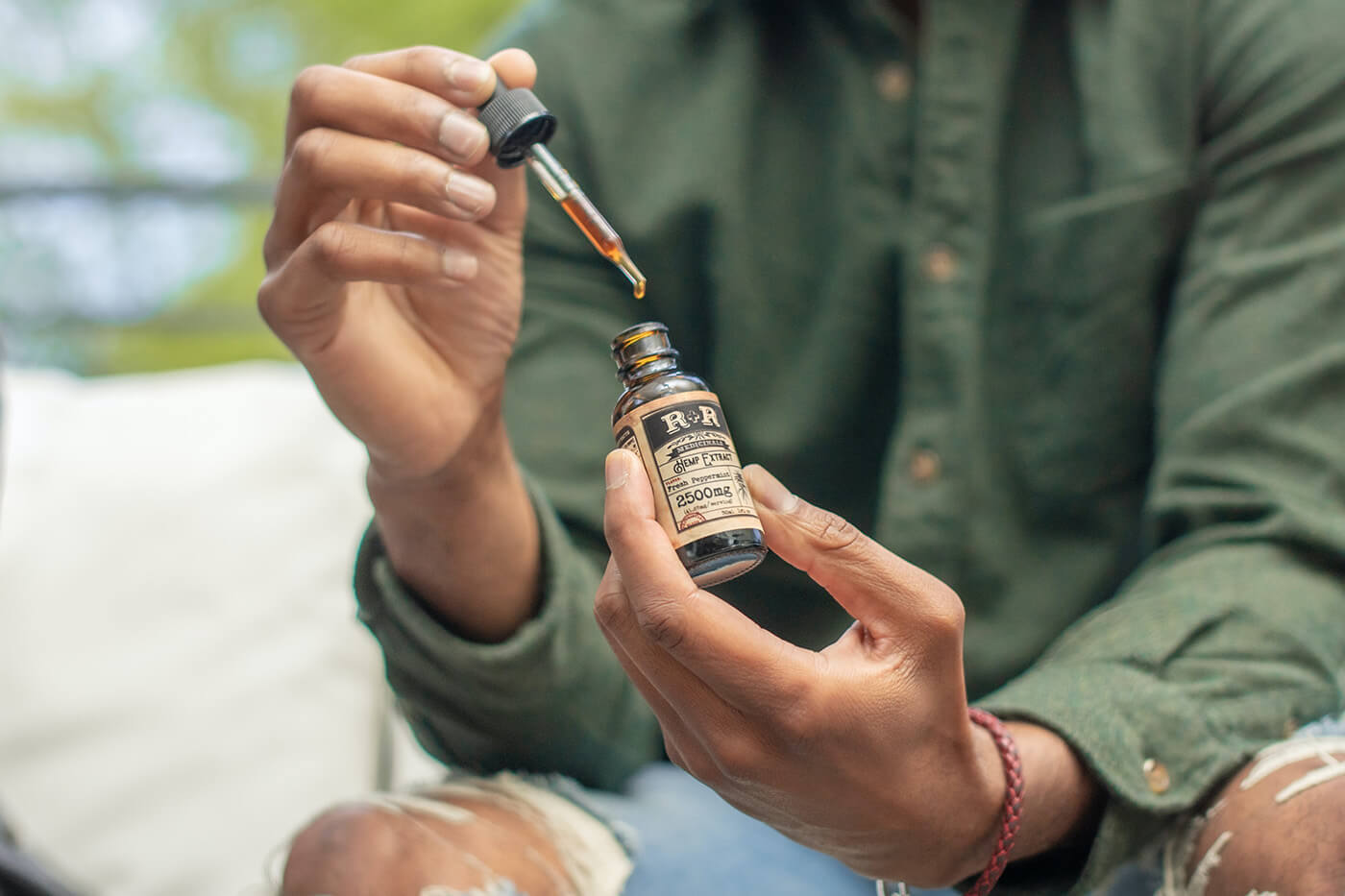 It’s thought that CBD is good for IBS for many different reasons. Here are four reasons that you might want to try CBD oil for IBS:

How to choose the best CBD for IBS

The best CBD product, or indeed the best CBD oil for IBS, will come from a reputable manufacturer that sources their hemp from clean, arable farmland. Good companies will operate transparently and honestly, providing easy to find links to third-party test reports that not only validate their product’s potency, but also its safety.

A company can demonstrate their product’s safety by having their hemp plant extracts tested for heavy metals, residual solvents, pesticides, microbials, and other potential contaminants, so always make sure you check they have a comprehensive lab report or certificate of analysis (CoA) available before you make a purchase.

We also recommend that you choose broad or full-spectrum CBD products (over isolates), as there are many additional cannabinoids found in the hemp plant that may also benefit IBS. In addition to this, CBD has also been shown to work in synergy with other plant compounds to provide more enhanced effects when administered together.

Two of our favorite companies are:

R+R Medicinals – R+R have a first-class customer service team, a fantastic money-back guarantee, and the best tasting CBD gummies on the market. Use code RRWORKS20 for 20% off your order.

CBDfx – CBDfx have a great range of products with unique and effective formulas (which also now embrace the power of medicinal mushrooms too). Use code CBDINCUBATOR20 for 20% off your order.

How to take CBD for IBS

The best way to take CBD for IBS may depend on your personal preferences. For example, taking a few drops under your tongue will result in faster-acting effects, but taking it in your food or drink will offer longer-lasting effects. You can read more about the different CBD delivery methods here, including a list of pros and cons of each, to help you decide which might be best for you.

Working out your CBD dosage for IBS

If you’re wondering, “how much CBD oil should I take for IBS?”, then I’m afraid I have to tell you that there is no one-size-fits-all approach to dosing CBD. Your CBD for IBS dosage needs to be personalized to suit your age, weight, metabolism, and chemical make-up, not to mention your symptom frequency and severity.

It’s not difficult to find your ideal CBD oil dosage for IBS, but it does take time and patience as you’ll need to start off on a lower dose of CBD (around 10mg), gradually increasing it until you reach the symptom relief you’re looking for.

Many people find that around 20-25mg of CBD per day offers great results, but I started to see the best results when I bumped my dose up to around 30mg.

So, can CBD help with IBS? I think you’ll agree that the preclinical evidence supporting using CBD for IBS is compelling, but large-scale human studies on the effects of cannabidiol on IBS are needed before anyone can say for sure that CBD does help IBS.

Due to CBD’s ability to slow muscle contraction and motility in the digestive tract, it’s thought that using CBD for IBS-D has the most potential benefits, but even sufferers of IBS-C will likely experience some benefits from the anti-inflammatory properties of CBD, as well as the pain relief offered.

Excited
21
Mind Blown
10
Not sure
1
WHAT!?
8
CBD Incubator January 5, 2022
Share
Tweet
Pin
Share
Table of Contents
1. CBD for IBS
2. Why people are turning to CBD for IBS
2.1. What do we know about IBS?
2.2. The endocannabinoid system and IBS
2.3. What is clinical endocannabinoid deficiency (CED)?
3. 5 ways CBD might help with IBS
4. How to choose the best CBD for IBS
5. How to take CBD for IBS
6. Working out your CBD dosage for IBS
7. Summary of Findings

What is the CBC Cannabinoid? | 6 Exciting Areas of Research

CBD Wax vs CBD Crumble: 5 CBD Concentrates You Need to Know About

Using CBD for Depression: 3 Reasons Why CBD Might be Better (Than Traditional Antidepressants)

CBD for Cerebral Palsy: 5 reasons you might want to try CBD for CP